Register with us now for more discounts and rewards!! | Crazy Deals with Discount up to 50%*!! | Warning! We would like to emphasize that we has never appointed any agent or any 3rd party to receive payment on our behalf. All payment should be made to "GAMESROOM SPORTS SDN BHD" account only 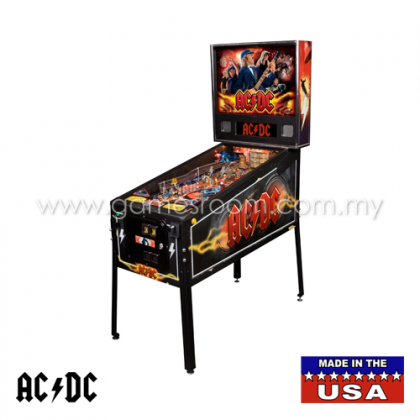 It doesn't get much better than this - one of the greatest hard rock bands of all time have teamed up with the only pinball manufacturer in the world to create this incredible table!

Following hot on the heels of the other rock band inspired pinball machine, Rolling Stones, is the AC DC pinball game. The Australian band, formed in 1973 by brothers Malcolm and Angus Young are considered as the pioneers of heavy metal. The translite image features a composite of Angus Young front and centre in his schoolboy outfit, with brother Malcolm behind, lead singer Brian Johnson on the left wearing his trademark flat cap, bassist Cliff Williams behind Brian, and Phil Rudd on the right on drums.

Mixed with the five band members are elements from their albums and tours, such as the inflatable Rosie character they have on stage during Whole Lotta Rosie, the train image from Rock-N-Roll Train and the cannon used on the cover of For Those About To Rock, on that same track and in their live performances.

AC DC will come in four different versions - the Pro model, a Premium version with most of the extra features of the top models, and two Limited Edition variants - Back in Black and Let There Be Rock - which are restricted in the numbers to be made. These take the Premium version and add extra bling to justify the additional cost over and above the Premium model. The beautiful cabinet features stunning AC DC artwork including the famous logo on the sides and pictures of the whole band. Cabinet speakers enhance your enjoyment of the game with incredible sound quality.